Myrtle Beach, South Carolina is undoubtedly a premiere golf destination, if only for the sheer volume of courses at the disposal of vacationing players. Currently, there are over 100 golf courses in operation in the Myrtle Beach area but it all started back in 1927 with the first, Pine Lakes International Country Club.

I have been to Myrtle several times and played dozens of courses over the years. My favorites being Blackmoor, a Gary Player Design, Jack Nicklaus’ Long Bay. and Marsh Harbor. Most courses that are considered “Myrtle Beach courses” are actually located several miles outside of the Grand Strand for which this tourism driven town is most famous.

I can remember driving past the entrance to Pine Lakes often in previous golf vacations. I was always intrigued by the fact that it was the oldest, but was never enticed to play it as it seemed an oddity nestled in with the surf shops, all-you-can-eat seafood buffets and pancake houses on the main drag.

This trip, however, was a family vacation. Not a golf trip. So, I had the opportunity to play just one round of golf. Being that I was going to be away from my wife and daughter for the duration of an 18-hole-round of golf, I decided against driving 30-45 minutes to play one of my old favorite tracks. Instead, I opted for the “Granddaddy”, conveniently located about 3 minutes from our hotel on the beach.

The first thing I noticed upon pulling off Kings Highway and onto the property, was that you almost immediately escape from the ultra-touristy, carnival-like signage and activity that is in-your-face at every turn on the strip, and enter a quiet, tree-lined community with authentic southern plantation charm and atmosphere. Most impressive, was the first glimpse of the amazing clubhouse, with its graceful southern architecture which verifies that this is, indeed, the “Granddaddy”. Before choosing Pine Lakes for my one round of golf on my vacation, I checked some online reviews. Several reviewers claimed they received poor service. My experience was the exact opposite. From the moment I came on the property to the moment I left the staff was courteous and engaging. As a single, I was pleased to learn that I would be playing with another single in a two-some. My partner was an older gentleman, Jim, who lived in Myrtle Beach and worked at Pine Lakes as a marshall. So, I knew I would have a great forecaddie as I threw my bag on the cart and we headed to the first tee.

One major drawback is that there is no range at Pine Lakes. There simply isn’t room. After a few strokes on the small putting green, we were on the tee.

Jim stepped up to the “3” tees so I followed suit. I would learn that he was a Vietnam veteran, former professional pool player (he was on ESPN), and formerly owned a business that was among the first to export NFL merchandise to Europe way back in 1980’s. Needless to say, he had plenty of great stories to share throughout the day. I really lucked out as a single on this day. My playing partner tees off on the par four 17th

After my tee shot flared about 60 yards off target into the trees on the right, Jim informed me that they allow for breakfast balls on the first tee at Pine Lakes because they don’t have a range. Since I was on vacation, I obliged, and hit my second chance down the fairway.

The tee boxes and fairways were in fabulous condition, still the winter overseeded grass as I played this round in late March. The fairways were well defined, firm, and lush. I played summer rules and never had a bad lie in the fairway. The rough was also low cut and mostly dormant.

The greens were a bit slow, but extremely well kept. Slow might be too harsh. I’d say the greens were reasonably slow in a way that didn’t take away from the experience, partly because they were so smooth with just enough break to keep things interesting. I especially enjoyed the tee shots. On most holes the player is presented with options to play to a target with a long iron or a hybrid, or to be more aggressive with a driver. We played the course at 6,305 yards. There was a nice mix of long and short par 4’s.

The par threes were all fun to play ranging from mid-iron shots to wedges. There are just two par fives at Pine Lakes, one on each side totaling a par for the course of 70. 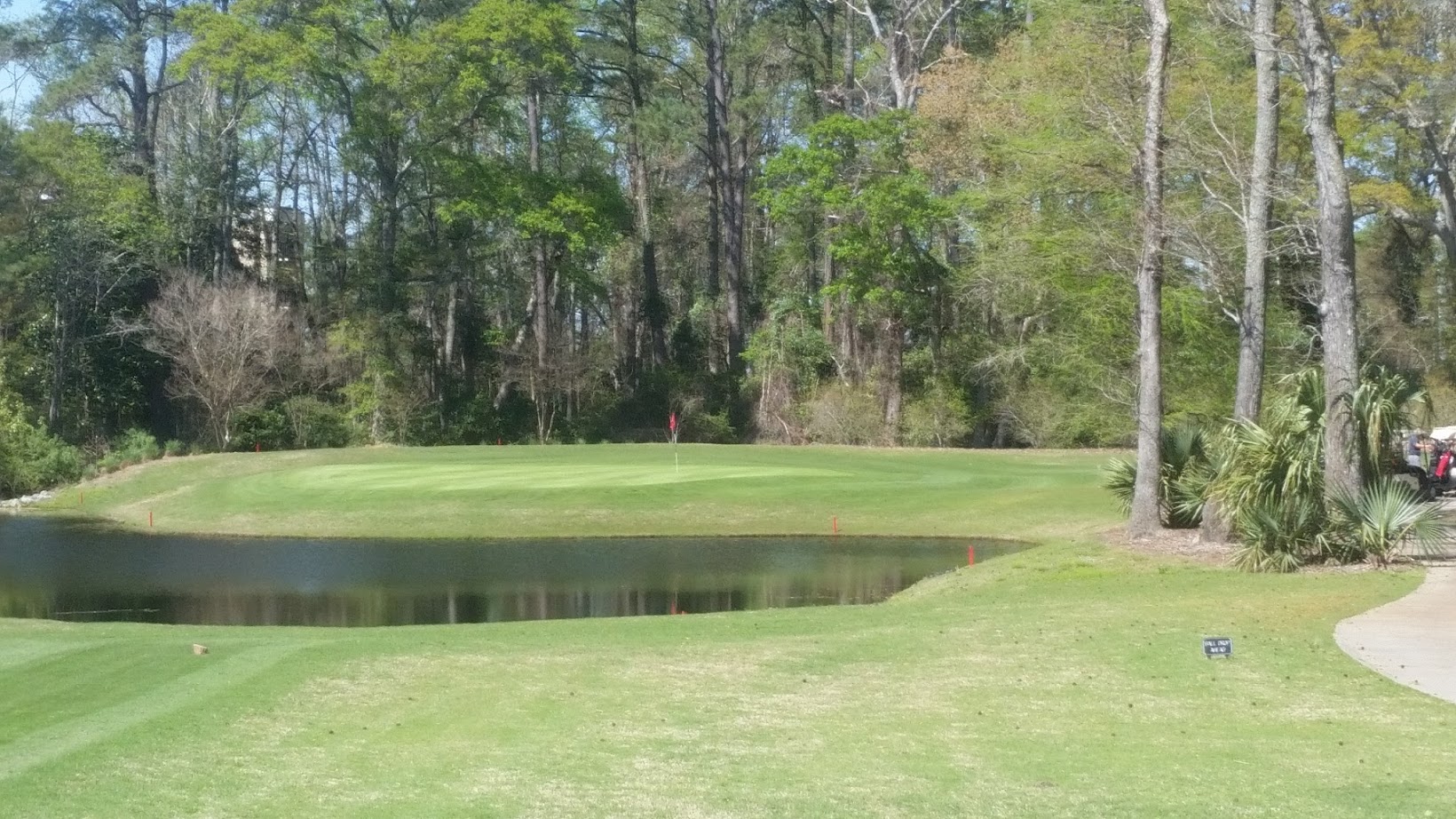 Despite all the development around the property, you rarely see any signs of it while playing the course. There are just a couple holes that present views of the high rise hotels and condos that line the beach across the street. There was just one hole, the short 145 yard par three 12th, where this is a distraction. On the 12th, an otherwise beautiful little par three with a green that slopes to a small pond that the golfer must carry, directly off the left side of the hole there are a pair of grey, cookie-cutter condos that remind you where you actually are. More plentiful, were the stunning views of the historic clubhouse which could be seen in the distance on several holes. Being the oldest course in Myrtle Beach means the place has some serious history. Gene Sarazen, Walter Hagen and Sam Snead have all played Pine Lakes International. My playing partner was sorry to report that their museum room was under renovation in the clubhouse. Jim was truly disappointed that I would miss seeing the amazing memorabilia normally housed there. If I am back in Myrtle Beach, it sounds like it would be worth stopping in just to have a look. Pine Lakes was originally built upon natural dunes less than a half mile from the ocean and featured numerous freshwater lakes and rolling fairways. Designed by architect Robert White, the first president of the Professional Golfers’ Association (PGA) of America and a co-founder of the American Society of Golf Course Architects, Pine Lakes has surpassed its initial glory after a complete restoration.

After an extensive renovation to the golf course and clubhouse, you can now experience the Granddaddy as it was in the spirit of the 1920s. The back nine reflects White’s original design and the front nine was renovated to enhance the elegant experience golfers from around the world associate with Pine Lakes Country Club. In all, I was pleased I chose Pine Lakes International Country Club for my lone round of golf and would highly recommend making it a part of the itinerary for your next trip to Myrtle Beach. While there may be better conditioned courses, the layout, history and clubhouse are truly unique and make Pine Lakes stand out as a memorable experience. If you are staying on the main strip, this would be a perfect course to schedule a second eighteen in the afternoon or a final morning round before heading back home.

Hard to believe this course is nestled in the heart of the the Grand Strand.

Interesting and playable with ample bunkering and water hazards

Slower greens than you would expect, but smooth & enough break to keep things interesting

Not a bad lie to be had in these well defined, consistently well manicured fairways

RECOMMENDATION:
Well worth a round and a course that you simply must play if you consider yourself an aficionado of Myrtle Beach golf.